In late February and early March, consumers rushed to grocery stores to stock up on paper products, cleaning supplies, and protective items. These items saw a significant spike in grocery list activity, but can we read our grocery list data and determine if these items are still being purchased at the same rate? Answer: Yes.

One notable piece of the puzzle is the challenge groups like P&G, Reckitt Benckiser, and SC Johnson face. They have been left to determine whether there will be a sustained increase in demand for their products or if at some point things will return to normal. Underproducing leads to reduced market share while an uptick in manufacturing runs the risk of profit loss if demand drops back down. Grocery list data can help.

AdAdapted’s grocery list data brings into focus when products experienced peaks and what kind of activity they are seeing now. Let’s take a look at how masks and household cleaning supplies activity has changed in recent months.

The paper products category was one of the first to experience extreme scarcity as consumers rushed to stock up. Despite two months passing, many shelves still have a limited supply of toilet paper and paper towels. In the charts below we see the peak occurring right around mid-March.

However, since the significant peak, both toilet paper and paper towels have trended back down and even declined below the list activity volume from the same dates in 2019.

Armed with this knowledge, we can make the assumption that consumers are stocked up at unprecedented levels and not using these paper products at the same volume which they were buying. The producers of these items are likely to manufacture the same levels of product while temporarily leaving the shelves scarce, as most shoppers will not be looking to replenish in the near future due to the massive stock up during COVID.

At first glance, it appears that the same significant peak and then drop in activity is true for soap; after peaking on March 18, the term “soap” experienced a steady decline in list-adds and has remained slightly below 2019 levels.

However, with CDC guidance placing significant emphasis on handwashing specifically we see that “hand soap” remains well above its 2019 levels in terms of grocery list appearance. Producers of hand soap can expect this sustained increase in demand to continue as long as handwashing is one of the leading commonly shared preventative measure.

Masks experienced a slightly later peak on May 3rd when list volume was almost 2x higher than the previous year. After leveling out following a brief valley in late March, list-adds for masks have sustained an average increase of 600% over 2019 since May 1 and steadily increasing.

The stickiness of this increase implies that consumers are making a habit of adding masks to their lists and continuing to buy them like never before. Absent the ability to obtain enormous quantities of masks in bulk or a reduced need to wear them, we can expect consumers to keep adding them to their lists for the foreseeable future.

Stay tuned in the coming weeks as AdAdapted continues to track which items appear more frequently, begin to decline, or normalize as consumer needs change. 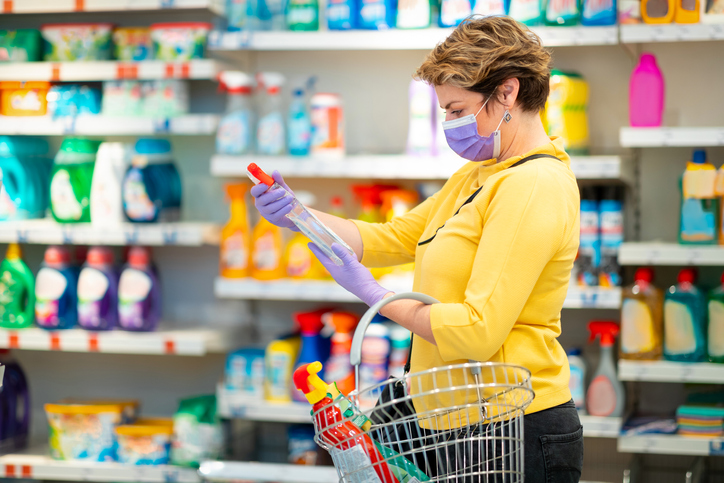